a story to discover

From the '30s to today
for your stay in Assisi

To know the origins of the Hotel Umbra you have to go back some time, up to the 30s of the twentieth century. The first nucleus of the current structure dates back to the beginning of that period: four rooms that, in winter, There were not many visitors to Assisi, except for some pilgrims who came to visit the tomb of St. Francis and paid homage.

Over the years, with the change of historical contexts, the structure has also changed, starting with the number of rooms that in almost a century have become twenty-four. But what has always remained the same, is the enthusiasm for the welcome that, generation after generation, has been kept stronger than ever. 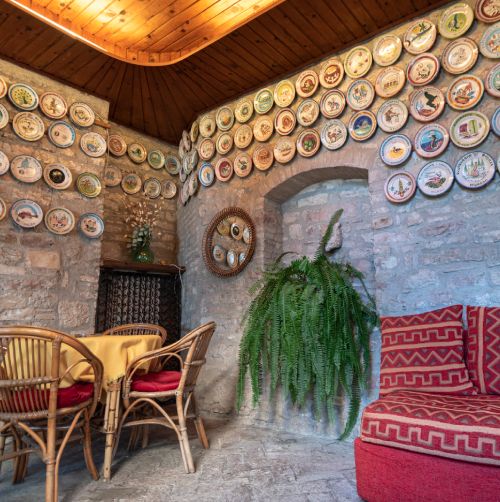 The first nucleus is born

The first nucleus of the current structure dates back to the beginning of that period: four rooms that, in winter, were heated with a wood burning stove. In Assisi there were not many visitors, except for some pilgrims who came to visit the tomb of Saint Francis and paid homage.
1940

At the end of the war it was the British who were the biggest and most assiduous frequenters of the structure at the time. They, lovers of animals, were fascinated to see that a hen had made the habit of laying its egg in the armchair of the small living room, still present today.
In the mid-1940s, the facility was expanded following a first purchase with new rooms, a large kitchen, a dining room and some stays inside the hotel.
1980

An elevator in the Middle Ages

After several years, a modernization of the roof and the creation of new rooms overlooking the plain, an important architectural feat is accomplished: in the original medieval structure, with all the challenges and difficulties of the case, An elevator is installed after more than one working winter. Almost a miracle if you think that the huge iron beams had to find space in the walls so ancient.
2000

In the last thirty years, following the seismic adjustment, the Hotel Umbra has seen its value even more recognized. The structure has been further modernized and revisited and, towards the middle of this period, the management has passed to the current family staff.